Beaten for Being Different

The documentary ‘When Kids Kill’ was in its second series when I was invited to edit produce one of the six episodes by Steph Harvie Campbell, Series Producer at Spun Gold Television. How do you best edit produce on a series that requires a sizeable injection of evocative drama as well as news archive but only has a relatively small documentary budget? These were just some of the questions that raced through my mind when I first entered Spun Gold TV’s in - house edit suite. 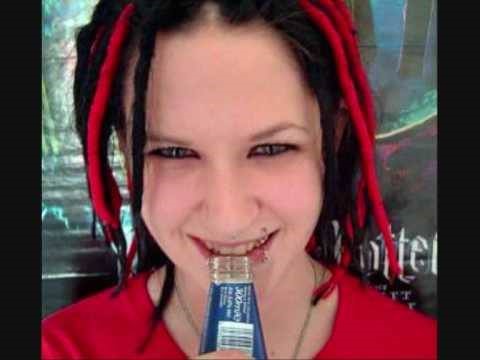 My episode, ‘Beaten for Being Different’, features the moving story of a 20 year old Goth alternative dresser, Sophie Lancaster, who was beaten to death 10 years ago by two teenage boys in Lancashire, simply for dressing differently. With the story very much in the past, I was faced with another challenge, how to make the documentary feel current and relevant today. We had a minute or so of news archive from 10 years ago and some stills of the victims and perpetrators but how would we bring this story back to life?

I’d worked on some gory shows in the past, such as ‘True Stories from the Morgue’ for TLC, where the essence of the series was to allow the forensic findings to tell their story so that the dead could ‘do the talking’. Despite having this gruesome series under my belt, I wasn’t quite prepared for how distressing it would be to hear the graphic accounts from police, friends and relatives of the unprovoked murder of Sophie Lancaster, a defenceless young woman who was unrecognisable after the attack. Early on, in the edit suite, I made it my mission to do her memory justice. In my mind, this meant creating a crafted film in Sophie’s memory, one that viewers would be hooked on; one that wouldn’t give the game away too early but keep the audience guessing. Impossible as it may sound as I write this, I wanted to make a film that would attempt to show Sophie did not die in vain, that she had left a legacy behind we could all learn from. 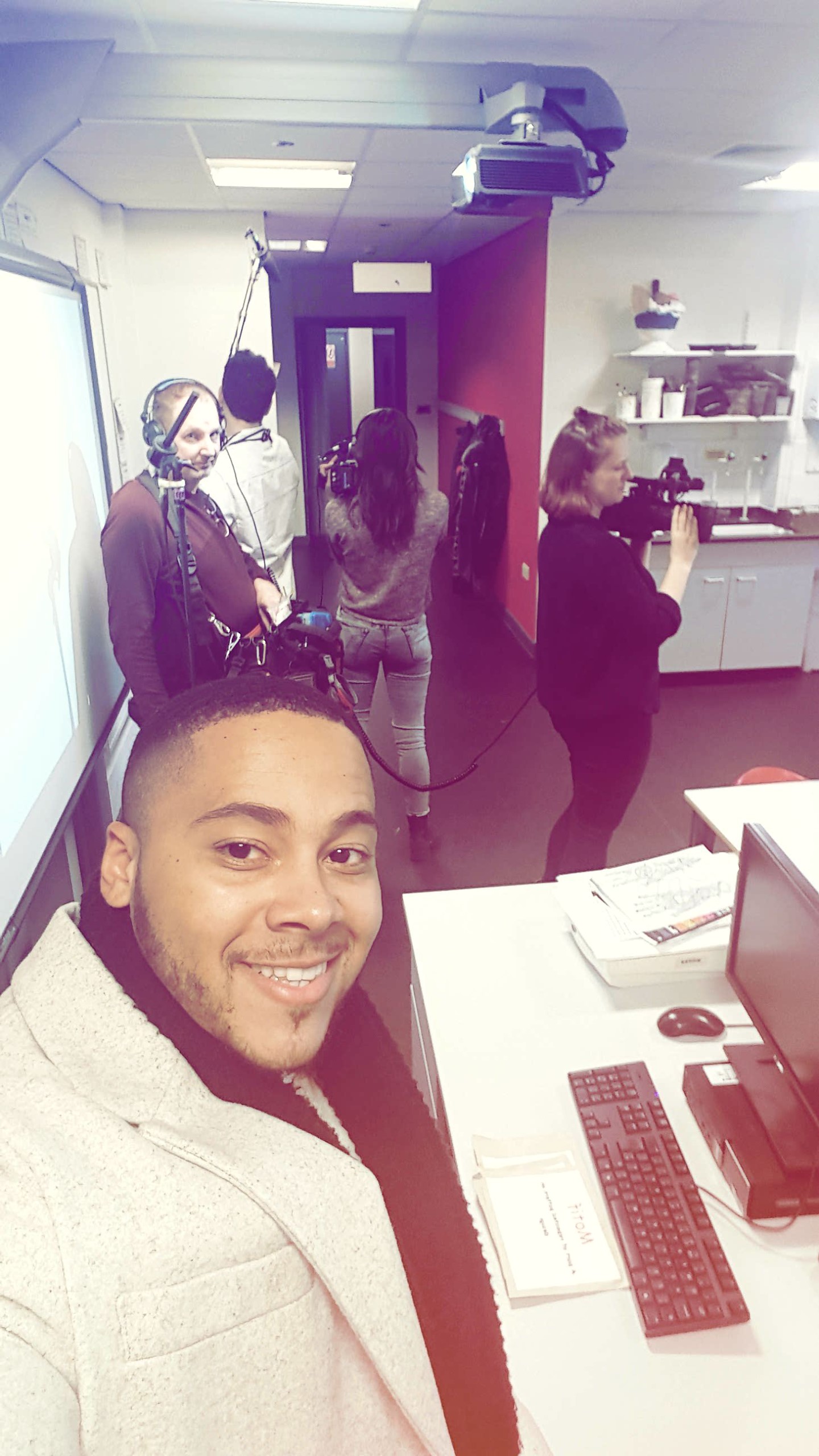 Each Edit Producer had three main elements in their programme tool kit with which to tell the basic story: a family member interview, a journalist and contributions from either the police or a lawyer.  However, this was hugely supported by our presenter’s presence; Aaron Roach-Bridgeman proved to be a powerful tool in gelling the films together and achieving this legacy message for my episode.

Having an empathetic presenter who interacted with family members was a useful device in the storytelling process over all 6 programmes; he could often relate to the subjects in our films and his interviews had a raw and honest quality that regularly brought tears to my eyes.

Whilst in the 6 week edit, it soon became apparent that the key to adding a drama element on these films on a low budget was multi-skilling. Shooting close ups of reconstructions or wide with defocussed subjects in the background, provided us with shots we needed to tell each story.  So, with our sync laid down, by week three, myself and my editor Ashley stepped out of the suite together and become graffiti hooligans, reconstructing our own drama shots in any space available. Friends and relatives were soon press-ganged into appearing as policewomen, gang members and teenage witnesses, while my kitchen was transformed into a forensic laboratory.

It became clear once our rough cuts had been pieced together exactly where drama reconstruction shots could be most powerfully used in the storytelling so by week five, we were on a roll and soon I was filming for other episodes in the series including machete wielding teenagers at Victoria Station and a stabbing between Hoxton gangs round the corner from the Spun Gold offices. 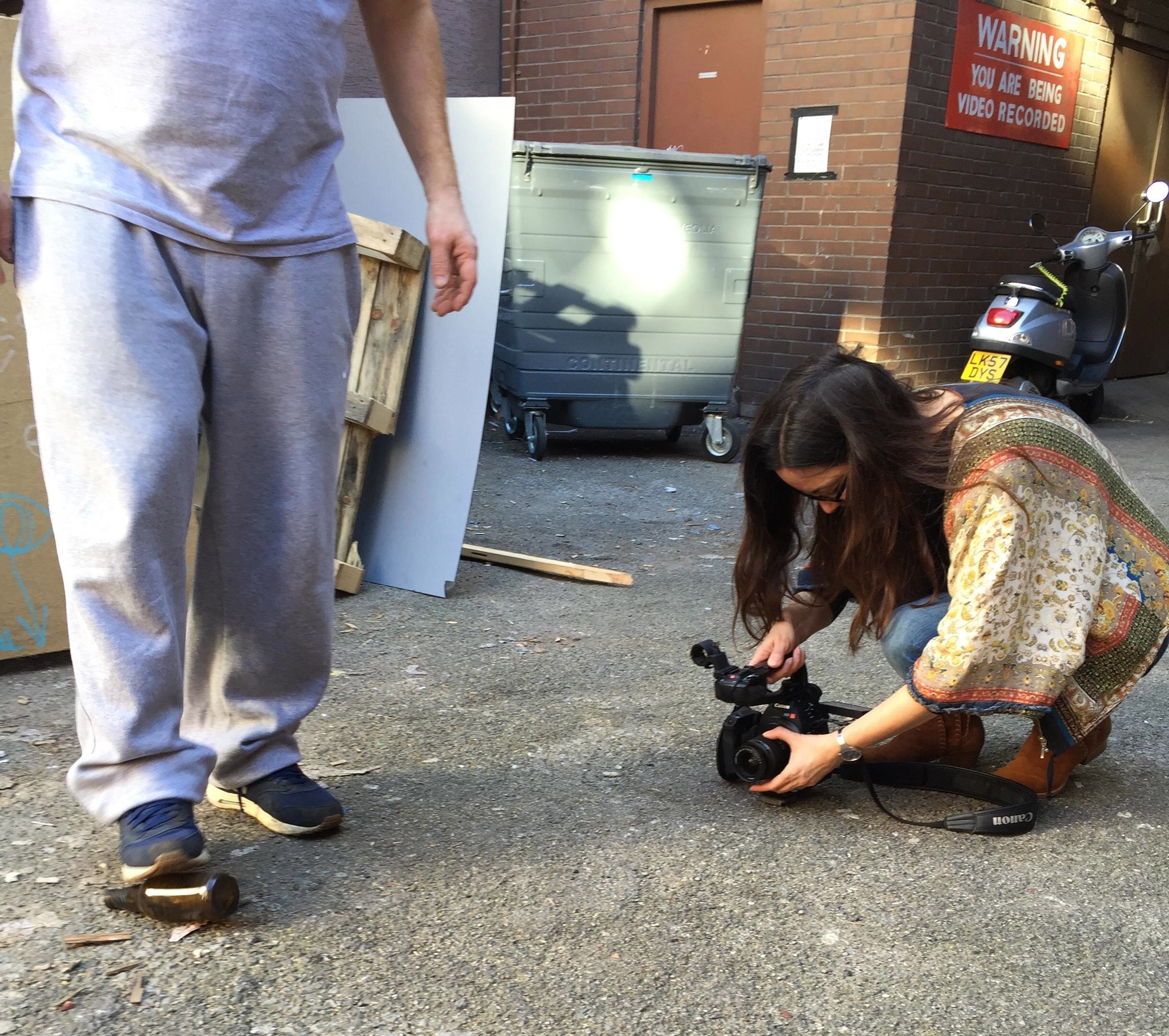 Music, as always, also played a vital role in telling these stories of child murderers. We didn’t have the luxury of composed music but we were able to get a great selection of styled tracks from a music library;  not only did this music influence the emotional journey we were taking the viewer on, we were able to reflect Sophie’s own ‘Emo’ taste in music as the shocking facts of her death were gradually unveiled.  There was a musical break through early on in my film, when we secured the support (gratis) of the band VNV Nation (Sophie had been a massive fan of the group and they had dedicated their song ‘Illusion’ to her memory) , their music helped to inject even more emotion into this already moving story. So much so that our Exec and SP were struggling to remain dry eyed at the rough cut viewing.

Via team meetings and working lunches, the process of making 6 programmes as a team became more and more collaborative; everyone was quick to exchange GVs on ForScene and discuss the intricacies and legalities of each case such as Joint Enterprise (when a group of people are charged for the same crime such as a murder). During the edit process, I was particularly impressed by two Edit Producer mums who job shared, their handover appeared utterly seamless, as the baton was handed over, it made me stand back and think how much TV had moved on since my early days in the industry when women rarely returned so quickly to directing roles post birth.

As human beings, we always want to know the reason why someone has committed the unthinkable.  Our programmes had been fine cut leaving holes for this explanation which was the finishing touch, in the form of master interviews from a psychologist and criminologist who provided explanations for some of the inexplicable child violence these stories portrayed. Both schedules and budgets were tight, with EPs transcribing and logging nearly all their own rushes, programmes began their edit journey while interviews were still being secured and shot on these highly sensitive stories, meaning edit teams had to think ahead and be creative in their storytelling.

My story ‘Beaten for Being Different' was about a girl who died at the hands of teenage boys, a murder classed as a hate crime. Her mother has campaigned for over 10 years to keep her daughter’s memory alive provided schools with workshops to stamp out intolerance; with hate crime on the rise throughout Europe, let’s hope the film’s message can make a difference.

Nadya is an experienced Edit Producer and Producer/ Director with a skill for telling sensitive stories, shaping narrative arcs and handing large amounts of actuality in a creative and insightful way.
View Nadya's Profile