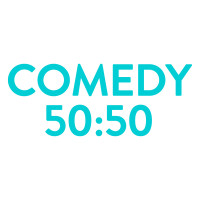 Comedy 50:50 is an initiative to address gender imbalance in comedy, starting with writers.

We strongly encourage producers to look at the balance of their writing teams, as we believe that a diversity of voices can only lead to better scripts, better programmes, better representation of our make-up as a nation onscreen.

With this in mind, we have created a database of female writers for producers to access free of charge. Writers are categorised as scripted, and comedy-entertainment with some appearing in both categories. Writers are responsible for uploading their CVs and all relevant information about themselves, and for keeping the information current and relevant.

As an initiative, Comedy 50:50 has regular events with guest speakers, networking, and information about current opportunities for writers. The events are attended by writers, producers and agents.

Whilst our focus is currently on writers, we will also be looking at other areas of gender imbalance in comedy including directors and crew.

If you've found the database useful, please let us know. We're keen for feedback. We can be contacted at comedyfiftyfifty@itv.com

If you've worked for Comedy 50:50, add credits to your profile to appear here.

There are currently no jobs listed by Comedy 50:50