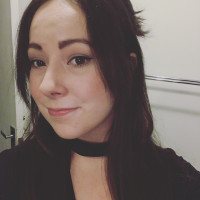 My passion for documentary comes from my interest in finding the extraordinary in the every day. Though I believe a documentary is always, to some extent, a reflection of "real life", it is those added layers of cinematic presentation (and, often, manipulation) that allow an audience to view what was once ordinary or unheard of in a new l... Read More

My passion for documentary comes from my interest in finding the extraordinary in the every day. Though I believe a documentary is always, to some extent, a reflection of "real life", it is those added layers of cinematic presentation (and, often, manipulation) that allow an audience to view what was once ordinary or unheard of in a new light. Personally, I love the way film allows me to be honest and showcase things that I may be too scared to articulate in a conventional way. Aesthetically, I love the ability to mix new and old textures onscreen in the hopes of achieving something that is both nostalgic and contemporary.

As someone who has grown up in different countries (under vastly different circumstances), I accustomed a particular attention to my surroundings at a young age. Born in Stockholm, Sweden in 1994 to a Swedish mother and British father, I immigrated with my family to the United States at 9 months old - a spontaneous move that led to us spending the next 10 years in very privileged circumstances. However, in 2004, my family faced severe financial troubles and numerous accompanying dramas, and after a traumatic year, we moved back to Sweden when I was 10 years old. I resided in Sweden until making the big move to London in 2014 to pursue an education in film and television production at University of the Arts, London.

Despite having no experience before attending film school, I had a passion for film in ways other than professional filmmaking - such as starting a Film Club in high school, posting film reviews in my spare time and being a voracious photographer/documentarian among friends. Looking back, I've always liked the idea of documenting memories, which is why I like documentaries with a "scrapbook feel", such as Dear Zachary: A Letter to a Son About His Father (2008), A Band Called Death (2012) and Anvil! The Story of Anvil (2008)) - all of which were key inspirations while making my short documentary, My Martian Dad in 2017.

In the final year of my degree, I struggled to find the right subject for my Final Major Project. While listing various topics, Martian Dance came to mind; this was the name of the band which my father was the frontman of during his short-lived career as a post-punk musician during the late '70s and '80s. Why the band came to mind, I cannot say, because I had thought so little of them over the years, let alone about ever making a film about them. I emailed the list of topics to my mom with "Martian Dance documentary" included, and the rest is history. The more we discussed it, the more it started to feel like a concept that would work for a documentary. After all, I was living in the very city where the band was formed. Though I was not immediately hopeful that I would find enough material (as information on the web was limited), I knew I had to give it a shot. I started my research by looking up each band members' name on Facebook. I was only able to find one, whom I messaged and heard back from the next day. He remembered my dad instantly and expressed an interest in sharing his stories of the band with me. Following our encounter, I met a countless number of people who knew and loved Martian Dance, many of which are featured in the final cut.

I took on the roles of producer and director for the film, accompanied by a small crew, many of which were fellow film students. It quickly became clear that the concept of a daughter searching for the untold story of her father's band was stronger if she was actually in the film, and so I was switching between being in front of and behind the camera, something I had never done before. Additionally, I conducted all interviews over the course of several months; our shooting schedules fluctuated as new leads and contacts would pop up along the way. The experience of making My Martian Dad was above and beyond anything I could have anticipated, and I hope to one day make an extended piece, perhaps including more layers to the band's complex history.

While I have the utmost respect for traditional, fact-based documentary programming, I believe recent years has demonstrated that the genre is pushing boundaries and, as a result, being regarded as more cinematic. In other words, audiences are acknowledging that, like fiction films, documentaries can contain elements of fantasy and escapism. For example, with My Martian Dad, I wanted the audience to feel submerged in the post-punk era as people who did not experience the time first hand.

Today, my aim is to use my degree to help me build further skills within documentary development, which is why I am seeking Junior Level roles such as third assistant director, runner, researcher and production assistant. Read Less