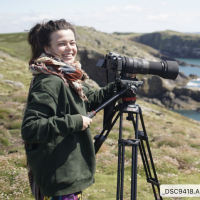 I am passionate about revealing the natural world in all its glory to viewers in order to inspire conservation... "You can't protect what you don't love; you can't love what you don't understand."After gaining a first class BSc at Bristol University, I have spent the last six years working my way up through factual t... Read More

I am passionate about revealing the natural world in all its glory to viewers in order to inspire conservation... "You can't protect what you don't love; you can't love what you don't understand."

After gaining a first class BSc at Bristol University, I have spent the last six years working my way up through factual television production. From development, through pre-production, production, post and delivery, I have worked on many hours of high-end, primetime programming for the BBC and other broadcasters.

I'm currently Series Researcher at the BBC's Natural History Unit, delivering over 40 short films about British wildlife to an audience of millions watching The One Show. I am constantly coming up with new ways to engage an unsuspecting public with the natural world - and this means I am across the latest developments in science, conservation, and quirky human-wildlife interactions by liaising with hundreds of organisations, experts and hobbyists across the country. I'm always aiming to deliver a blue-chip visual feast on a daytime budget! From showcasing animal behaviour at night to celebrate 50 years since the lunar landing, to building a macro/studio set up to film high speed strikes in the first hours of newborn cuttlefish's life, as they learn to hunt, or starve.

I must prioritise my workload, as I may be working on half a dozen disconnected stories at once. I am reactive and flexible as needed by the unpredictable and shifting periods of animal emergence and behaviour - setting up shoots and delivering within tight schedules, budgets and turnarounds. I use academic literature and conversation with experts to produce fully cited research notes for story-boarding, scripting and fact checking, liaising with the Director and SP to work up the editorial detail. On location I record all sound (operating a 633 mixer, boom, radios) whilst being responsible for media management, contributor/animal wrangling, and dynamic fact checking. I source and clear all required archive, making suggestions to the director, and fill in post production paperwork. Working in such a small team has given me the opportunity to take on a huge amount of responsibility and I am looking forward to directing and edit producing my own VT later this year.

Last year I worked on long-form, international primetime documentaries: 'War on Plastic with Hugh and Anita', taking up where Blue Planet II left off... provoking conversation and empowering the nation to take action to reduce unnecessary plastic from our lives and culture; I set up fixed rig filming with wildlife veterinarians for 'Big Animal Surgery', and joined the hunt for the next antibiotic by teaming up with a scientist researching wild alligators in the Texan bayous for 'The Truth About Antibiotics'. I liaised with fixers, activists and researchers from a diverse array of backgrounds in order to hone down to the story we were looking to tell, and then set up filming.

In my spare time I am a keen diver, holding Advanced Open Water PADI and I'm currently completing a commission for a short promo video for a diving company in the Azores. I've spent many months travelling and living overseas, including Nepal, India, Peru, Colombia, Ecuador, Israel and Uganda.

With long standing experience as a specialist factual researcher, this year I stepped up to my first Assistant Producer role, on a primetime, talent-led science documentary for BBC1 after I developed the idea to commission.

As Assistant Producer on 'The Truth About...' I have gained access to sensitive healthcare institutions, top levels of government and industry and cast vulnerable adult contributors. I built relationships with international organisations and world leaders in scientific research in order to uncover stories at the cutting edge of the topic. I devised ambitious yet achievable experiments, stunts and sequences to bring the subject matter to life. I organised shoots and went out on location, wrangling talent, contributors, crew; writing RAs, call sheets, story notes; and recently had the opportunity to DV direct a couple of sequences.

Having spent a lot of time setting up international and domestic filming, and working on location in small teams, I have a multitude of skills both in the office and out on a shoot. I camera assist, record sound, and data wrangle and can shoot second camera if required.

I have bases in Bristol, Scotland and London but am happy to relocate anywhere you may need me. I have a full UK driving license, am first aid qualified, hold an Advanced Open Water PADI qualification and have a valid iVisa for the next 5 years. Read Less