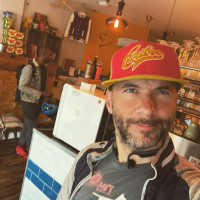 Dan Hall is a smart and talented Producer and self-shooter. His superior handling of contributors and high-level access is impressive and his professional and friendly manner with people would make him a valued member of any team.

Dan Hall is a very talented producer. He mixes creativity, experience and hard work on everything he does.

Dan is a really smart and creative producer and self-shooter - and an absolute pleasure to work with. He's adept at gaining the trust of contributors, and handling sensitive stories on and off screen. He's also a talented shooter and photographer.

Dan is a hugely talented Producer whose infectious enthusiasm rubs off on everyone around him. He has bags of self initiative to get on with things by himself but his real strength lies with working with other people given his tremendous people skills. A fabulous asset for any production. Go hire!