Talent Manager spoke with several women working in TV about their experiences as a woman the industry. Here are their stories: 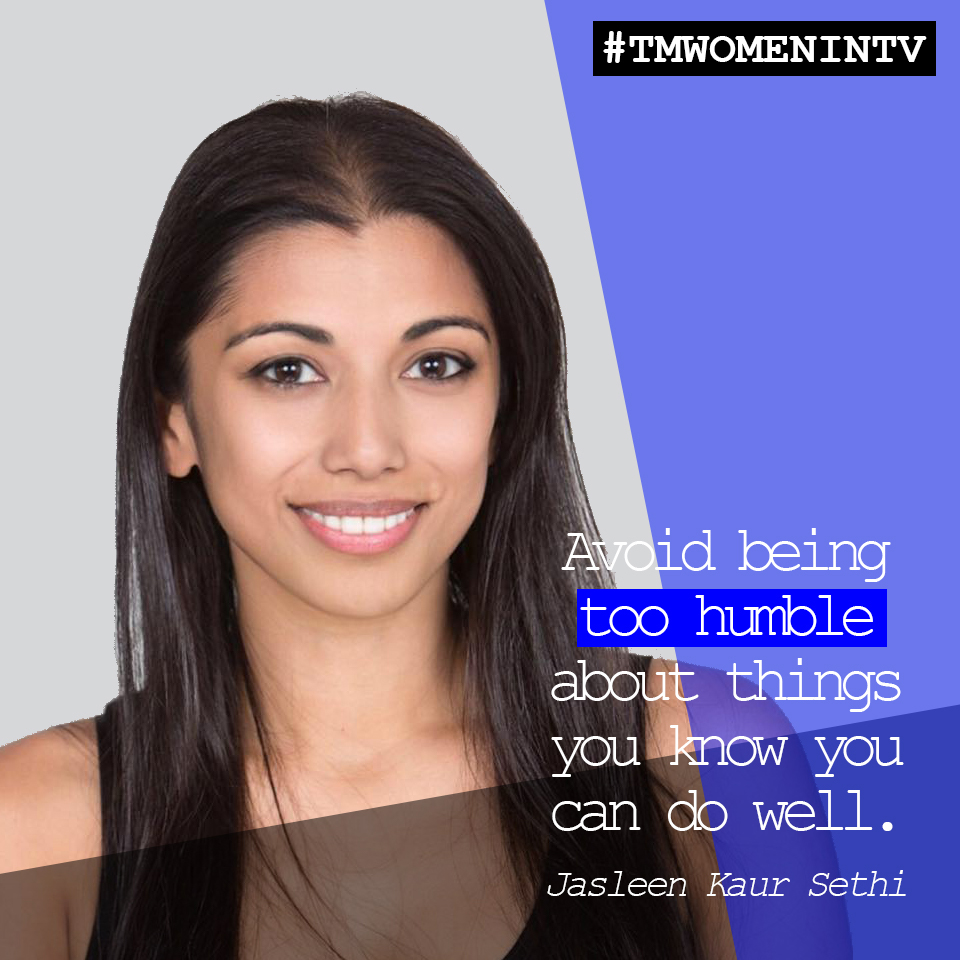 My name is Jasleen Kaur Sethi and I am a self-shooting Producer/Director working in observational documentary. I've directed and edit produced hours for the BBC, Channel 4 and online platforms. I love making films that tell intimate, character-driven stories that speak about the big issues of our time, and I always try to tell them with warmth, humour and purpose. At the heart of my work lies a passion for storytelling and crafting arresting visuals.

I would urge women who are interested in becoming self-shooting directors in documentary to avoid being too humble about things they know they can do well, and if they have technical and shooting skills, keep building on them, and be confident about them! It's also always a good idea to seek out mentors and teachers in the industry who you can work with and learn from. 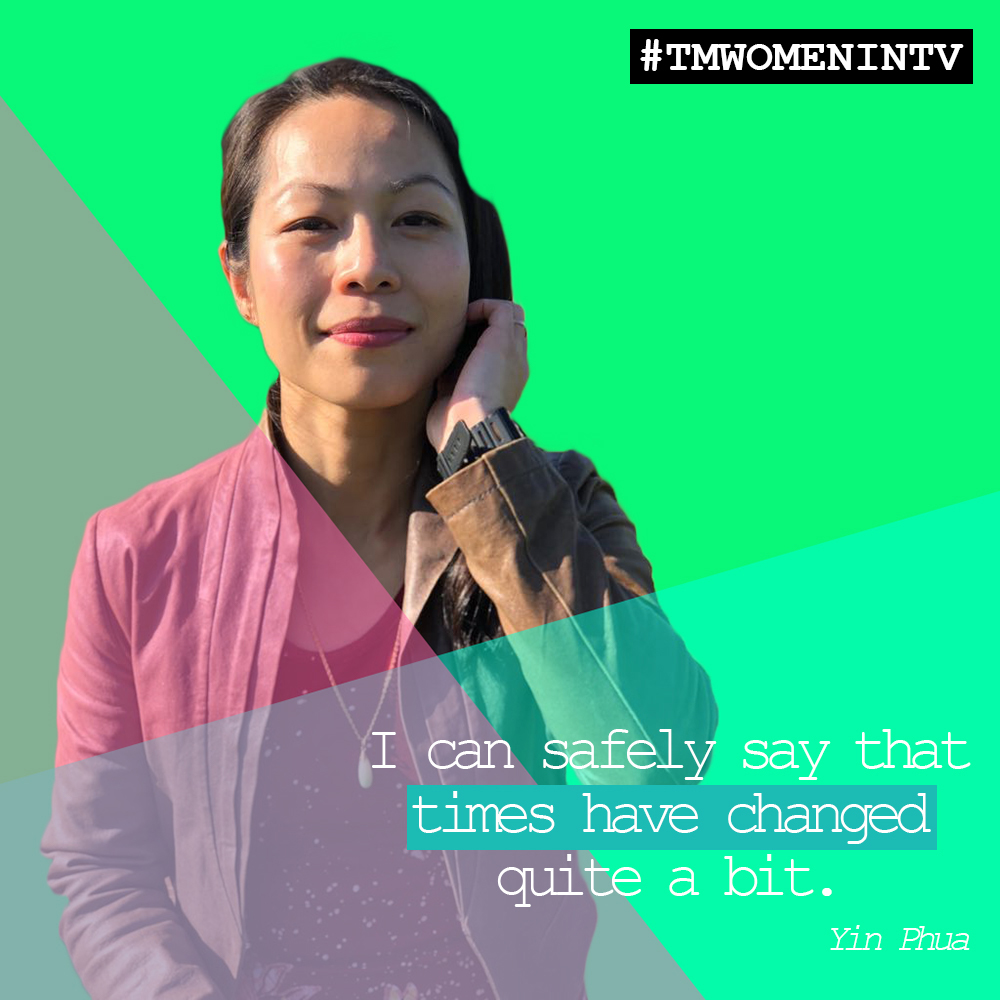 I’m Yin Phua, a creative producer and director with a knack for factual entertainment and reality TV. My hidden talent is that people like to tell me things. I carry so many people’s secrets that sometimes I can’t tell fact from fiction! In real life this can be a burden — but in reel life it is a skill I have honed and used in order to make great television.

What advice would I give to women wanting to get started in this industry?

This is my advice for anyone starting out, not just women.

Be willing to do the mundane jobs and stay enthusiastic doing it.

Don’t be afraid to ask questions.

Do more than you’re asked and always be observant of what people need and offer to help!

When I first started in the industry, there was still a lot of old school macho behaviour that I frequently witnessed on set. Raising your voice to get things done was not unusual. I remember feeling like I was sometimes treading on eggshells because there was a certain code of ethics, set by men, that I had yet to learn. However, I can safely say that times have changed quite a bit.  Now, there are some projects I work on that are predominantly made up of women. As more women have joined the industry, there has also been a shift in tone and attitude to one that focuses more on nurturing and communication. Overall I think this has affected equality and helped women gain more ground in the industry.
A successful woman in the industry is someone who is confident in her voice, acknowledges her strengths and weaknesses and knows how to bring out the best in the people she works with. 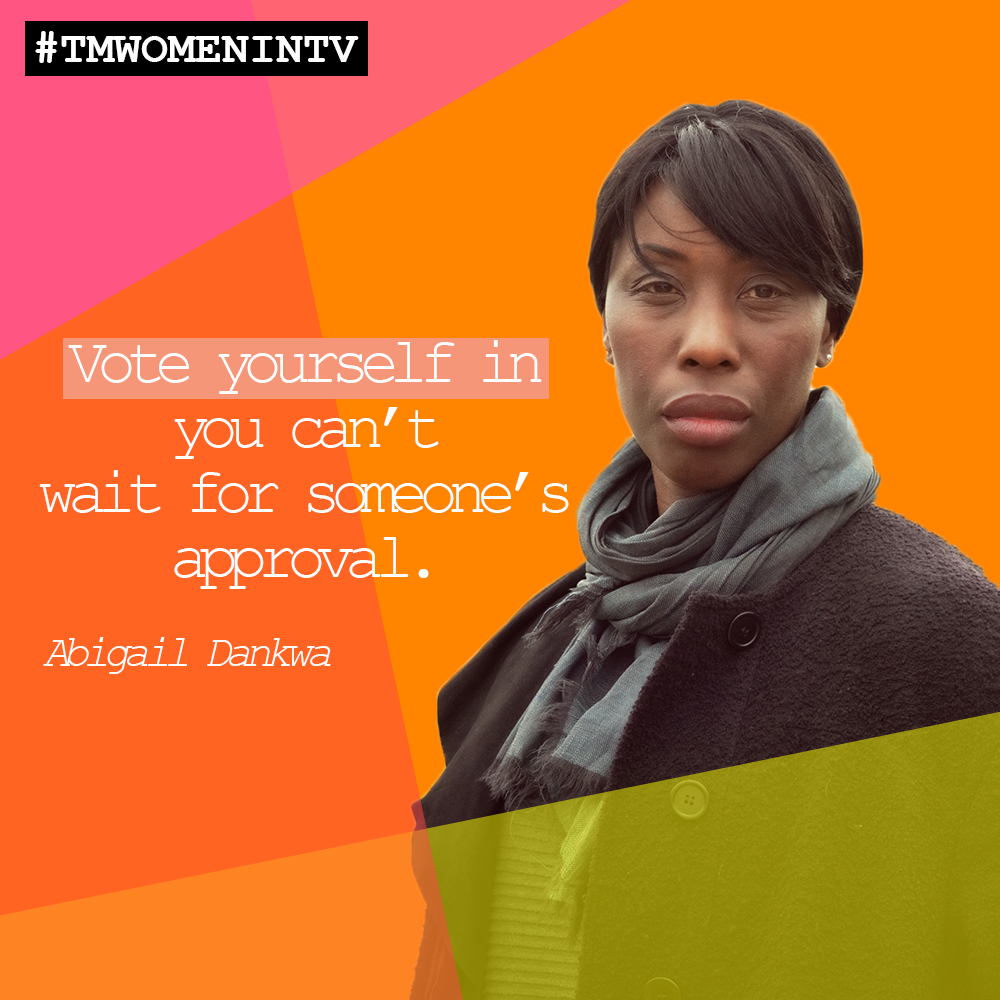 My name is Abigail Dankwa and I'm a Multi Camera Director and Fixed Rig Director. My recent studio credits are WonderBall (a new prime time quiz show for BBC Scotland), Tipping Point (ITV), Impossible (BBC) and, rig-wise, GPs Behind Closed Doors. I'm also currently on my fourth year directing for 24 hours in A&E and I love it!
My entry  into TV was through an MA in Producing and Directing Television Entertainment at the NFTS. I graduated in 2012, and straight after that I was one of the Stage Managers on the London 2012 Olympics and Paralympics Opening and Closing Ceremonies. I also worked as Floor Manager on all the UEFA Champions League Finals for six years, as well as other FM jobs. The first show I directed was as a gallery director on Big Brother and Celebrity Big Brother in 2015, and it was a real baptism of fire! I love the collective experience of live — and my goal is to direct big entertainment and events shows, both national and internationally, like the Superbowl Half Time show with the Beyoncé or U2 equivalent of the day.

My advice for women working in TV is to just get on with it — vote yourself in because you can't wait for someone's approval. Yes, it can be tough but remember: you want this! Look for your tribe: women and men that will pop corks when you've got that great job but also pop corks when you've had a crap day (other drinks are available)! Find mentors 5 years ahead so they can understand where you are and suggest how to get started, and 20 years ahead because hopefully their experience means they've seen everything and will be a font of knowledge. Make loads of mistakes, practise proper self-care and good luck!

The 2019 BAFTA Craft Awards showed that the talent is definitely there for female directors. From the four nominated shows for the Multi-Camera section, all but one of the five directors named were women and the winner was Barbara Wiltshire for the absolutely fantastic "Inside Number 9: Dead Line" (especially good when you remind yourself that it went out live, go watch).

For me being a successful woman in the industry means being a director that works with the flexibility I want, as well as receiving the same pay and being offered the same opportunities as a man with the same level of experience. It means mentoring those behind you and learning from those in front. It also means working out how not to be thought of as the makeup artist on your first day on the job (no offence to the fabulous makeup artists out there and yes that happened to me, by a woman). Please support other women. (although it would be good to replace the following sentence with the word "women" with "humans"...). As Madeline Albright said, “There’s a special place in hell for women who don’t help each other!”. 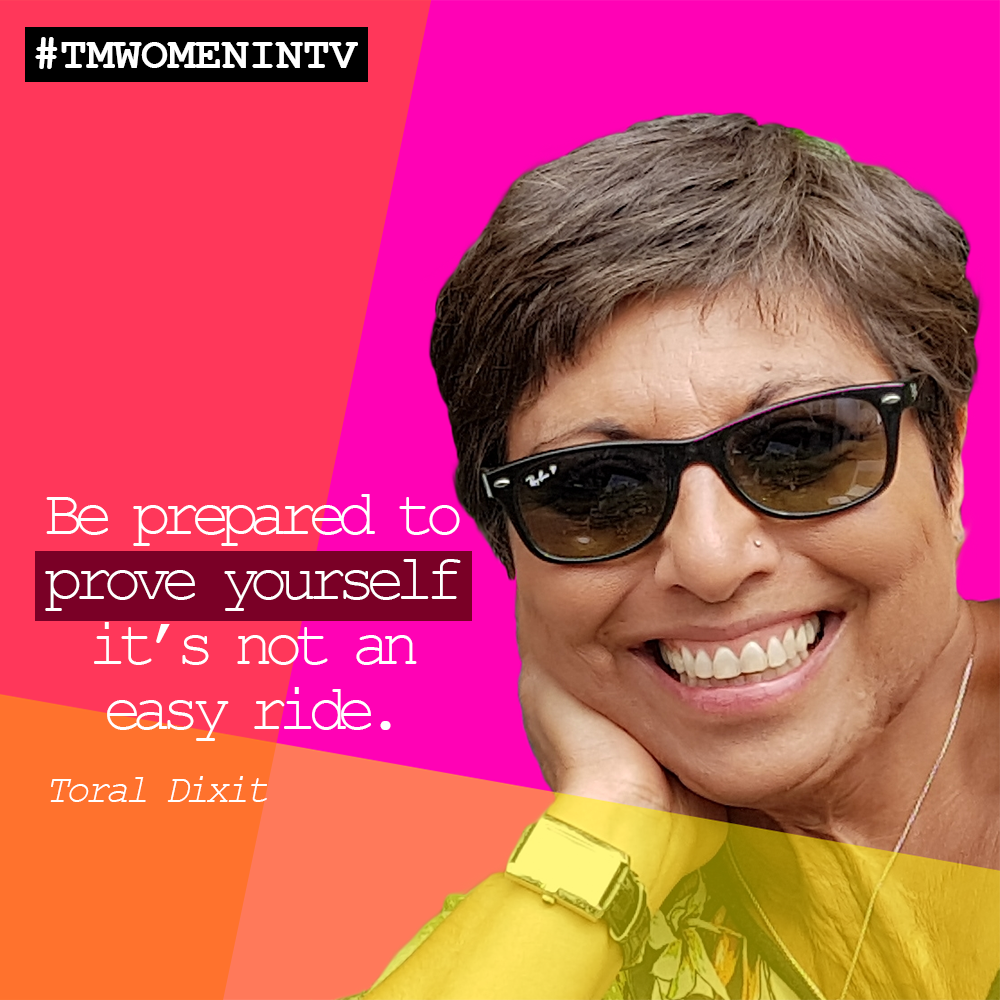 My name is Toral Dixit, and I am a shooting Producer/Director working in Factual, Specialist Factual and Obs. Doc. I previously trained and worked as a professional photographer and journalist — both gave me invaluable skills for my work in TV. I've now worked as a director for almost 20 years – mostly self-shooting, but also directing crew when given the chance!

The industry has given me the opportunity for some incredible experiences filming in the furthest corners of the word including in jungles and rainforests (Amazon, Guatemala and Assam Jungle), the Arctic Circle / Siberia and remotest Africa, among others. While these locations are awesome, it’s the stories that count. Whether it be filming archaeologists uncovering 2000 year old Mayan relics, or filming with the Wildlife Trust of India in the remote Assam Jungle,  or indeed filming childbirth in a UK hospital! All of this has given me memories and experiences I wouldn’t have in any other job, and for that I am grateful, but it hasn’t been easy. It can be a stressful and all-encompassing job in an industry that can be unforgiving– but I wouldn’t have missed it for the world.

My advice to women wanting to get started in the industry is to be prepared to prove yourself – its not an easy ride. Get yourself trained to self-shoot — along with any other technical skills you can.  So often, women are perceived as not having the technical know-how.  Show them you do. Stand up for yourself when faced with situations where men are given more responsibility (particularly in junior roles – the boys often are given opportunities that the girls aren’t).

Unfortunately, last year Directors UK produced a report showing that female directors in Factual have declined by 3% (2013 – 2016), and there’s no reason to think the trend has halted or reversed. It’s a sad inditement in this day and age. I have seen several female friends and colleagues leave the industry as a result. The picture is better for junior roles, but often they don’t make it into directing for a number of reasons – unconscious gender bias, the pressure of work/family balance and lack of opportunities.

My career has been incredibly rewarding, giving me experiences I would not get in any other job, but it has not been easy.  There’s often a price to pay in an industry that can be brutal, whether that’s the stress of the job or not being around for family / social events - but I wouldn’t have changed my career for the world.  I am now choosier about the roles I take, and commit more to personal and social plans, holidays etc – which I wouldn’t have been able to do before. I guess that’s the advantage of age and experience. 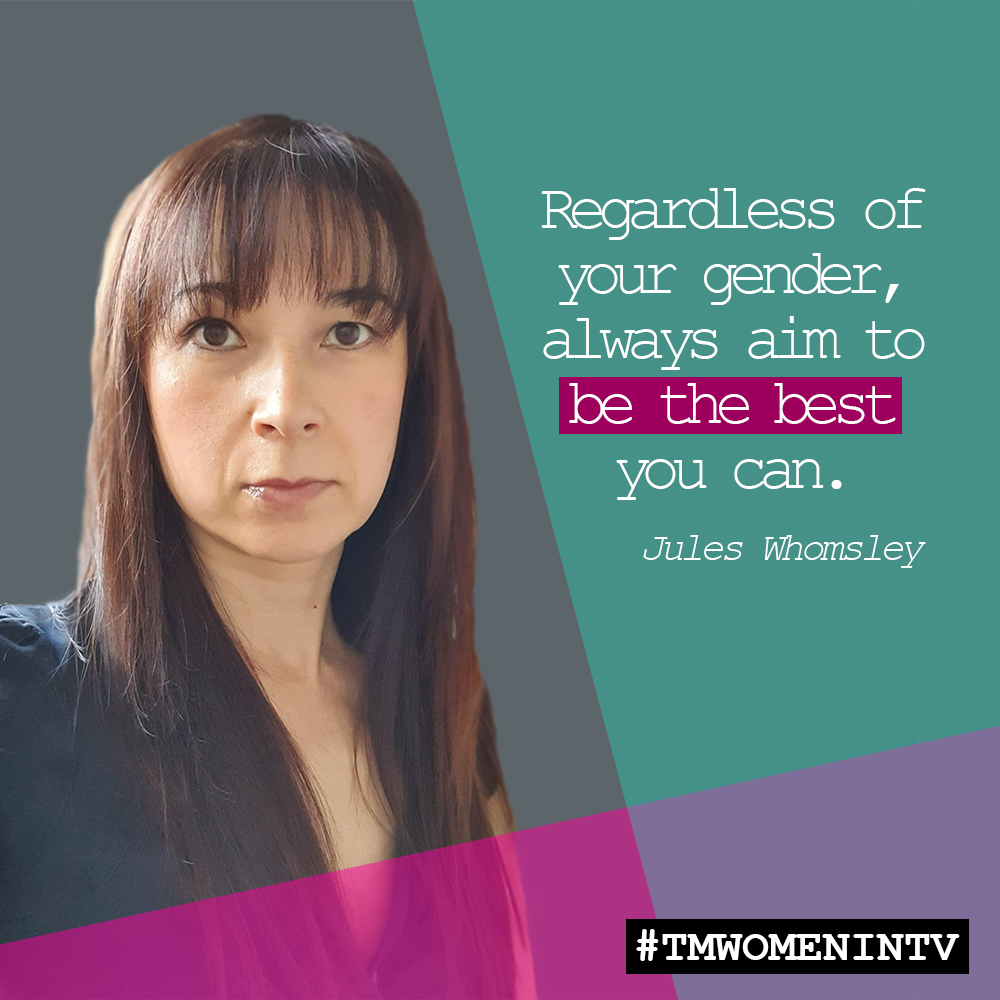 I’m Jules Whomsley, a successful Series Producer and Producer Director, mainly working in factual entertainment and specialising in food programmes.  I’ve worked in broadcast TV for over 25 years - for all of the major channels (BBC1, BBC2, ITV, Channel 4, Channel 5) - and I’m currently working as the Director of new Channel 4 cookery series “Cooking Up A Fortune”. My favourite job in TV so far has been as the Series Producer for two series of ITV's "Gino's Italian Escape."

My advice to women wanting to get started in this industry is this:

Never think of yourself as a "woman in television”.  You are a PERSON in television with no need to compare yourself to a man.  Regardless of your gender, always aim to be the best you can in your chosen career path.  Television is one of the most demanding yet one of the most rewarding industries.  If you are determined enough, you can achieve amazing things whether you’re male or female.

The Talent Manager becomes the first UK networking site within the TV and film industry to implement unconscious bias controls — allowing companies to hide the profile pictures of freelancers during the recruitment process.
Read more.