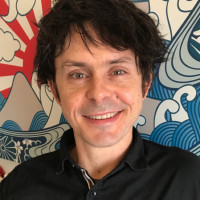 # currently in possession of a fully supported Avid suite in my home office courtesy of ‘Virtual Post’ A fully fledged fast secure facility grade set up with tech support. Available from monday 11th May.

Film and Television editor with experience in a wide range of factual, documentary, and entertainment programming, pop promos, multi-cam ‘as-live’ events and more.
I love science, engineering, machines and building and when I’m not editing I can usually be found in my shed, up a ladder or under a car.
Strong narrative, problem solving and organisational skills in the edit, and a desire to share knowledge, by creating engaging rich content.

‘Claimed and Shamed’ Curve for BBC 2 - Factual
Documentary series that casts a covert eye over the ever-growing problem of insurance fraud, and sees outlandish claimers as they're caught out on camera. This is the 8th season and as such as a strong format heavy on graphics, recon and music with a tight schedule.1 x 1hr working for Claire Simpson

‘The Factory’ Twenty Twenty for BBC 2 - Factual entertainment
This series investigates the reality of the Low Paid jobs market by following twenty people from different backgrounds as they take on these challenging roles. They will be assessed by real employers to see who’s got the skills and the stamina to take on Britain’s lowest paid jobs and
1 of 3 x 1hr working with Helen Tempest.

‘Tomorrows Food’ BBC Factual for BBC 1 - Factual entertainment
What will we be eating in the future? Dara O’Briain hosts a new magazine style series investigating new technologies and developments in the world of food production and innovations in the way we consume.
1 of 3 x 1hr working with Eileen Inkson.

‘Tattoo Disasters UK’ 5 Productions for Channel 5 - Factual entertainment
Tattoos can be works of art. But what happens when you regret the ink job etched into your skin? Meet the people hoping to tackle their tattoo regrets.
Fast cut, fast turn around show. Series 1- 20 x 22min and series 2- 5 x 1hr for Andra Heritage.

‘Benefits Britain’ 5 Productions for Channel 5 - Ob-Doc
More Brits are living off benefits today than at any other time since the establishment of the welfare state. This six-part documentary series lifts the lid on the reality of life on benefits in Britain. I edited two in this series ‘Jaywick’ and ‘Big Families’. 2 x 45 min working with Louise Mason for Jacqui Wilson.

'Close Calls On Camera’ Topical TV for BBC 1- Factual Entertainment
Series presented by Nick Knowles, which shows the split-second moments when everyday events are transformed into disasters and meets the people who lived to tell the tale. Working for Virginia Hill and Kate Roberts.

'Portrait Artist of the year' Story Vault for Sky Arts – Multicam as-live
Working with prestigious the National Portrait Gallery and The British Library and presented by Joan Bakewell and Frank Skinner, the competition travelled across the UK and Ireland in search of inspiring and talented artists – 1 of 6 1hr contests working with Southan Morris.

'Pandas 3D' Oxford Scientific films for IMAX / Nat Geo / Sky – 3D Natural History
The Journey Home were granted unprecedented access to the Wolong Panda Center in China. Meet all of the pandas at the center as they get ready for their new lives in various parts of the world, and learn about their fascinating habits and personalities.  Beautifully shots and a joy to edit. 1 x 1hr working with Nigel Levy for Caroline Hawkins

''Sky High Scrapers’ Electric Sky for Discovery 3D – Factual entertainment
Explores the gravity defying exploits of America’s largest rope based high-rise cleaning company. The series covers some of the most dramatic, challenging and dangerous jobs on the East Coast of America. 1 of 6 1hr working with Ginita Jimenez.

Bugs Bites and Parasites' TwoFour for Discovery – Medical Ob doc
With exclusive behind the scenes access, Bugs, Bites and Parasites gives viewers a front door look this world class team of experts are responsible for treating the thousands of Britons who return from foreign lands with some of the deadliest diseases on earth. 1 of 6 x 1hr working with Chris Rowe for Bridget Sneyd.

'Britain’s Empty Homes' Ricochet for BBC1 – Property Factual Entertainment
Property series revealing the work of the nations empty property officers and following the restoration and resurrection of some of the countries forgotten buildings. 1 of 10 x1hr.
budget and lifestyle, and following the work of the nation's empty property officers.
'Britain’s Brightest' RDF BBC1 – Quiz show
In Each episode six contestants' emotional intelligence and ability to multitask are put to the test. Contestant VTs.

'Holiday Hit Squad' TwoFour for BBC1 – Factual
Series following the toughest hotel inspectors in the business, and exploring how best to make sure holidays across the globe, from the Mediterranean to the Far East, live up to their promise.1 of 6 x1hr.

‘Body Bizarre’ Zig Zag/ Barcroft for Discovery / TLC – Medical Documentary
Body Bizarre uncovers the real human stories behind the headlines, with deeply personal interviews and footage meeting people who suffer from conditions so rare and mysterious that the medical world is often baffled. 1 of 6 x1hr working with Michelle Darling.
‘
Storage Hoarders’ TwoFour for ITV – Daytime
In Storage Hoarders, Aggie MacKenzie meets the people who are still clinging onto things they never see or use. In each episode they’re challenged to sort through their stuff and say goodbye to the things they no longer need. 4 of 20 x1hr working with Maria Knowles.

‘Tasty Travels’ TwoFour for ITV – Daytime
My Tasty Travels with Lynda Bellingham will see the actress travelling across the UK over the summer sampling some of the country’s best ingredients, hunting down long lost recipes and taking part in a variety of village fairs and fetes. 3 of 12 x1hr working with Steve Grogan.

‘Born to Kill’ TwoFour for Channel 5 – Documentary
This series takes an in-depth look at notorious murderers from around the world and searches to uncover the psychology of each killer to try to get an understanding of what drove them down the path to murder. 1 of 10 x1hr.

‘Fat Surgeons’ Electric Sky for Really- Medical Ob doc
This series explores what life for overweight people who are living with the limitations and consequences of bad diets and over-eating and follows their journey as they undergo surgery, cope with the after effects, and try to re-build their lives. 2 of 6 x1hr working with Andy Webb.

‘Secret life of the Rainforest’ Electric Sky for Smithsonian - 3D Natural History
With a diversity of mammals, birds, and bugs unrivaled almost anywhere in the world, Panama's Barro Colorado Island is the perfect microcosm of nature. Follow scientists as they explore how life thrives in one of the most complex habitats on Earth.
1 x1hr.

Building the Brand’ Electric Sky for Discovery - 3D Documentary
Explores amazing factories, following the creation of some of the world's most iconic products, including The Rolls Royce, Jack Daniels Whiskey, Trek Bicycles and the Apache Helicopter. 4 of 10 x 1hr working with Andy Webb.

‘London Triathlon 2010’ Dream Team Television for Channel 4 - Sports event
Coverage of one of the worlds largest Triathlons Cut to a tight schedule this extreme contest saw Celebrities compete along side novice’s and Elite athletes in Londons Docklands. 1 x 1hr working with Stephen Isles.

‘Mr Moon’ Skaramoosh Disney Playhouse – Children’s animation
Disney's 52 part animated space adventure series with Mr Moon and his cosmic friends, I was the picture editor responsible for assembling the shows and QC of the final animations. 32 of 52 x 20min working with James Shock.

‘Cash in the Attic’ Leopard for BBC – Daytime
The Cash in the Attic team help people raise money from household items for something special. 20 x 44min working with Steve Grogan.

‘The Feeling On Ice’ New Wave for MTV / DVD - Music Documentary
The film follows Pop Band ‘The Feeling’ on a journey back to Meribel, a ski resort in the Alps, which was to The Feeling what Hamburg was to The Beatles. Nararrated by and featuring überfan Kiefer Sutherland, it feature 3 tracks live on the piste. 1 x 1hr for Robin Bextor.

‘Max’s Big Tracks’ Electric Sky for Animal Planet - Doc/entertainment
Hardened tracker and wildlife expert, Ian “Max” Maxwell sets off on a challenging track through the wilderness in search of seven of the worlds most elusive animals. 7 x 1 hr with Dan Dixon.

‘Ultimate Tourist Scams’ Electric Sky for Discovery – Factual entertainment
Going on Holiday is an experience we all look forward to but every time you step off a plane in a foreign country, or even leave your own state, that dream holiday can quickly turn into a nightmare 12 x 25min with Dan Dixon.

‘Dangerous Book for boys’ Rock Steady pictures for Channel 5 – Entertainment
Documentary series where celebrity fathers and their sons trace the journeys of historical icons and embark on exhilarating expeditions, based on the best-selling book. On board cameras.

‘The History of Greece’ Electric sky for The History Channel - Documentary
1 x 1 hr with Andy Webb.

‘Tales of the Living Dead’ Electric Sky for The History Channel – Documentary
Explores ancient murders using forensic science to try to solve the crime. The films are fast-paced with subtle reconstruction used to illustrate the stories. Graphics flesh out what the victim looked like and how they might have died which builds a picture of the environment in which the victim met their end. 2 x 1 hr working with Clare Milward.

‘Lady Flash’ Pop promo for The Go Team
Archive and studio footage to create imagery reminiscent of the music samples from the record. Working with Ian Parton.